25 countries, along with the European Union and the Holy See, gathered for the third Plenary meeting of the International Partnership for Nuclear Disarmament Verification (IPNDV), an innovative public-private partnership between the U.S. Department of State and the Nuclear Threat Initiative, to advance understanding and capacity around the complex technical challenges involved in nuclear verification. The Partnership endeavors to develop the tools and technologies to aid in the verification of future treaties and agreements at lower numbers.  The meeting, held June 28-30, was hosted by the government of Japan and included 100 participants, including the International Atomic Energy Agency.

In welcoming remarks, U.S. Ambassador to Japan, Caroline Kennedy, noted the personal significance of the event, “President Kennedy’s proudest achievement was the limited nuclear test-ban treaty. He understood how difficult this work is and how important.”  She encouraged participants, saying “Your work takes patience and persistence. It takes verification and transparency. It takes engagement. It reminds the world that peace is possible. This week’s session is of historic and global importance, and I wish great success in advancing our shared goals.”

Japanese Parliamentary Vice Foreign Minister, Hitoshi Kikawada, underscored the importance of including both nuclear and non-nuclear states, saying, “I strongly hope that this meeting will be an exemplary case in which nuclear weapon and nonnuclear weapon states can engage in fruitful discussions and work hand in hand toward a world free of nuclear weapons.”

Reports from three working groups created the key focus of the meeting. The groups addressed an initial scenario involving the dismantlement of a notional nuclear weapon, the related inspection of that dismantlement, and the related technologies that could support such an inspection. This initial scenario allowed the three groups to coordinate efforts and develop common understandings of the challenges and potential solutions associated with nuclear disarmament verification. The three groups are:

“The three IPNDV Working Groups are initially focused on the most important and most challenging issue associated with future arms control reductions: how to monitor the dismantlement of a nuclear weapon.  The three working groups have agreed on a total of ten deliverables and are making significant progress towards them,” said NTI Vice President Andrew Bieniawski. For more on the working groups and their deliverables, click here.

Press coverage of the event included:

The International Partnership for Nuclear Disarmament Verification is designed to build capacity among states both with and without nuclear weapons, and develop technical solutions for monitoring and verification challenges across the nuclear weapons lifecycle. This initiative sets into motion the key recommendation from NTI’s Innovating Verification: New Tools & New Actors to Reduce Nuclear Risks series, released in July 2014: States should come together now to begin an international process to assess verification gaps, develop collaborative technical work streams and contribute to overall global nuclear threat reduction.

For more information, visit the U.S. Department of State or the Nuclear Threat Initiative online. 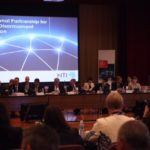 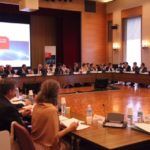 “The importance of verification in future nuclear disarmament efforts is largely unquestioned, and the collective capacity of nations to address verification issues is increasing…through cooperative efforts like the IPNDV.”

—Ambassador Robert A. Wood, U.S. Permanent Representative to the Conference on Disarmament